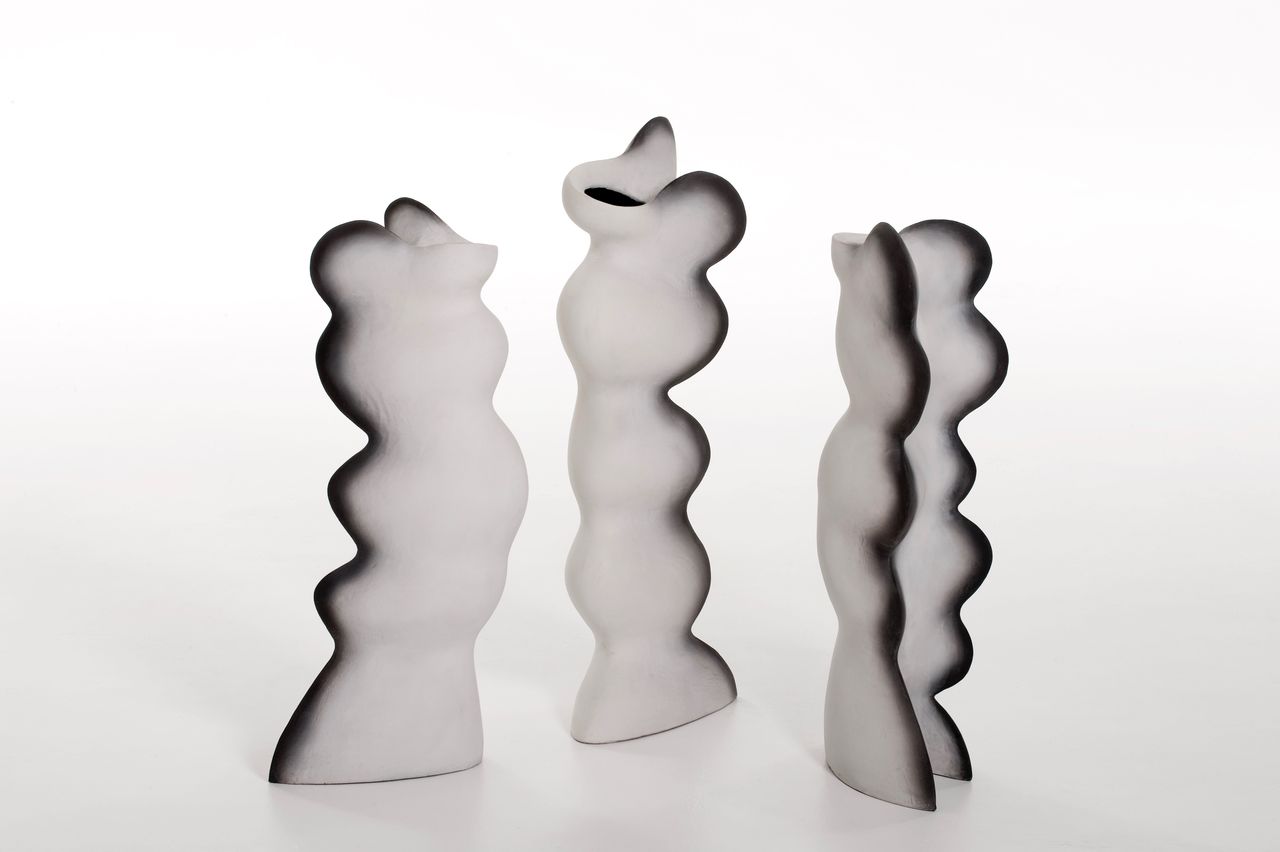 Elisabeth von Krogh has won distinction as an artist through her colorful ceramic vessels. These can be experienced in several public places and institutions in Norway, among others, in a government building in Oslo, at the University of Bergen and at Oslo Airport. In her work process, she emphasises traditional craft at the same time as referencing the history of Modernism in design, sculpture and painting.

It seems anachronistic today to draw clear boundaries between craft and visual art. Elisabeth von Krogh has helped dissolve this boundary in her works, given how they hold references to visual art from the 1900s as well as to ancient hand-crafting traditions. It is fascinating to reflect on her perpetuation of traditions deeply rooted in cultural history. Since the dawn of civilization, people have made pots, vases and other useful objects, engraving them with their lives by embellishing them with pictures from myths and ornaments derived from nature. The vessel is a widespread motif in art history, not least in still life painting in the 1600s and 1700s and as a formal compositional element in Modernist painting. During the Symbolist period (starting ca. 1865), the vessel became a metaphor for the power of transformation, thus revitalizing its archaic meaning: due to its reference to both life and death, it has been, and continues to be, a symbol for the cycle of life. From the urn with ashes to the womb as a container for life and growth, the vessel, on both a practical and a metaphysical level, can be interpreted as a metaphor for the fundamental conditions for human life.

The vessel as a subject in art draws our minds to past civilizations, for instance to the ancient Greeks, where amphorae, oil lamps and other clay receptacles were decorated with highlights from mythic stories. In this way, they became cultural objects as much as functional objects and mythological reference works. During the Geometric period in Greek art (ca. 900-700 BC), craftspersons developed a strict ornamental structure emphasizing the precision and elegance of forms. This aesthetic approach also characterizes the works of von Krogh.

Many of her vessels have a geometrical structure with an illusionistic and surreal character. Optical devises – patterned surfaces with polka-dots or grids, also perspectival distortion – succeed in ‘folding out’ three-dimensional form and making it appear flat, as in a Cubist painting. Movement arises between surface and form, causing us to feel we are looking at a painted still life; at the same time, we are pulled back into space and to the physical presence of the form. This play with our perception brings to mind Victor Vasarely (1908-1997) and the optical illusions in his intensely coloured prints.

In her solo exhibition at the gallery Kunstnerforbundet (2009), Elisabeth von Krogh improvises on the vessel as a subject in art. Organic but strictly stylized forms point to ‘the vessel’ as the main theme and imbue the works with energy and humour as they occupy the gallery space with their bodily expression. In the series Optica (2009), the vessels have become sculptural objects simultaneously as their serial presentation as rectangular forms creates a powerful illusion. The negative, concave forms show nuanced gradations of light and shadow that, from a distance, convince us of their three-dimensionality. Walking in the room, however, our experience alternates between concave and convex form, between the surrounding space and the three-dimensional objects. We experience a rhythm in light and harmonious colour. The works in the Optica series form a still-life frieze that erases the boundary between picture and sculpture. Their velvet-soft character is the result of experimentation with slip-glazes.

The transformation which the vessel shape undergoes can bring to mind how Giorgio Morandi’s (1890-1964) poetic still lifes change everyday objects such as vases into apparently living beings. So also in the works of von Krogh: the vessel motif is the starting point for anthropomorphic and organic metamorphosis. Experimentation with form in itself is the theme of the series Green Wave (2009): the forms of these vessels are ‘thrown’, with botanic force, out into the room. It is as if the spirit has slipped out and transformed them into bubbling plants with a strong presence of light and shadow. They gain the bewitched character of objects as seen in animation films; like living beings, they exert energy and dancing rhythm.

In von Krogh’s latest works, it is easy to notice inspiration from Fernand Léger (1890-1964). He was one of the first to experiment with non-figurative abstraction by using contours as an overt means of expression in his painting and sculpture. In several of von Krogh’s works, the boundary of a form has a dark contour that gradually fades into the object’s otherwise white surface. This represents a further development in her work with the relation between line and form.

Elisabeth von Krogh relates to the main characteristics of the Modernist concept of sculpture: a form’s inherent abstract quality, and dynamism between space and mass and concave and convex form. These she treats as basic principles for her own sculptures. They form the very foundation for her artistic practice and enable us as viewers to have a musical experience through movement, colour, form and space.

Precision in craftsmanship is also a crucial dimension in her works, revealing her dedication and love of ancient traditions in ceramic art. 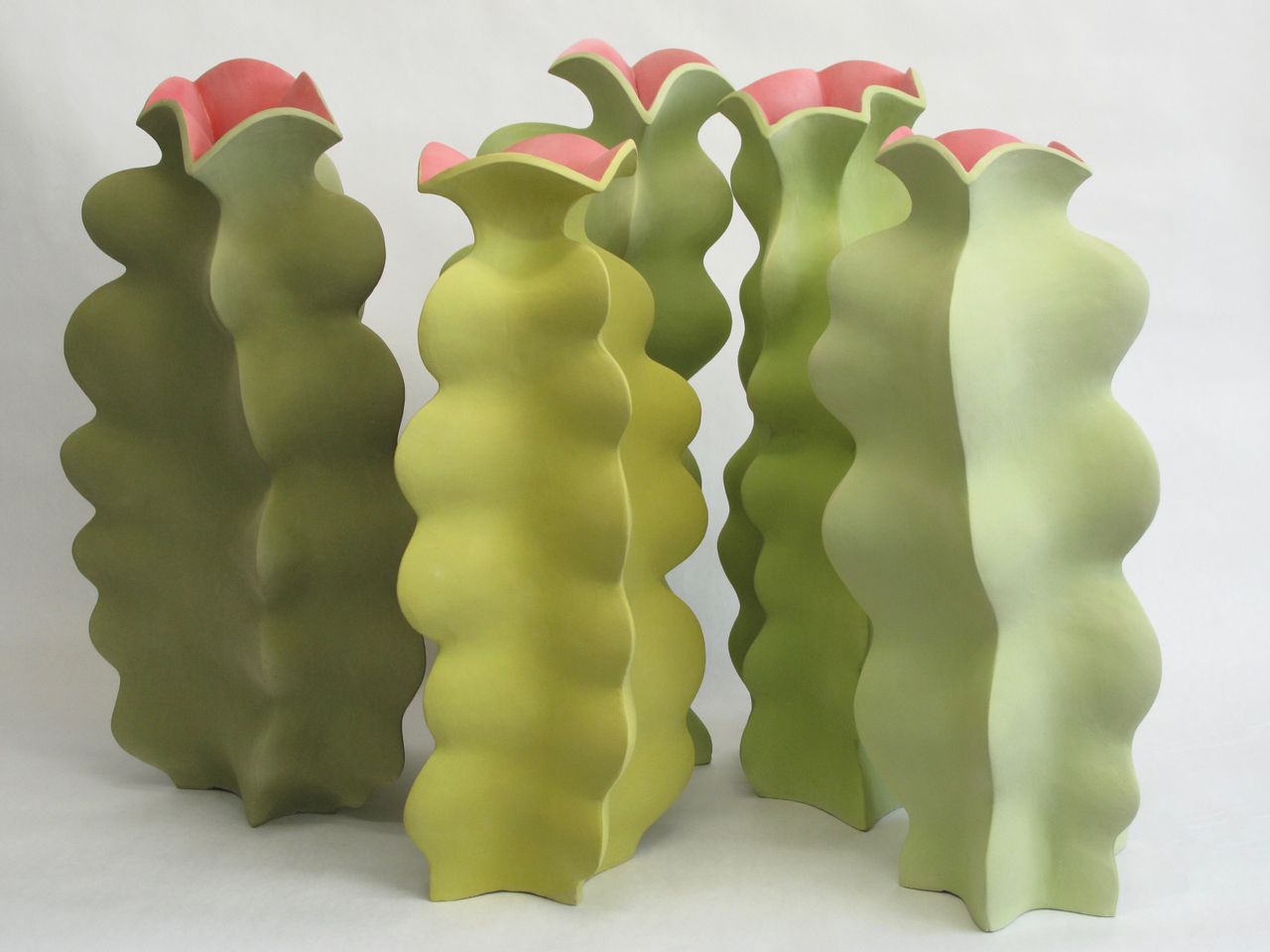