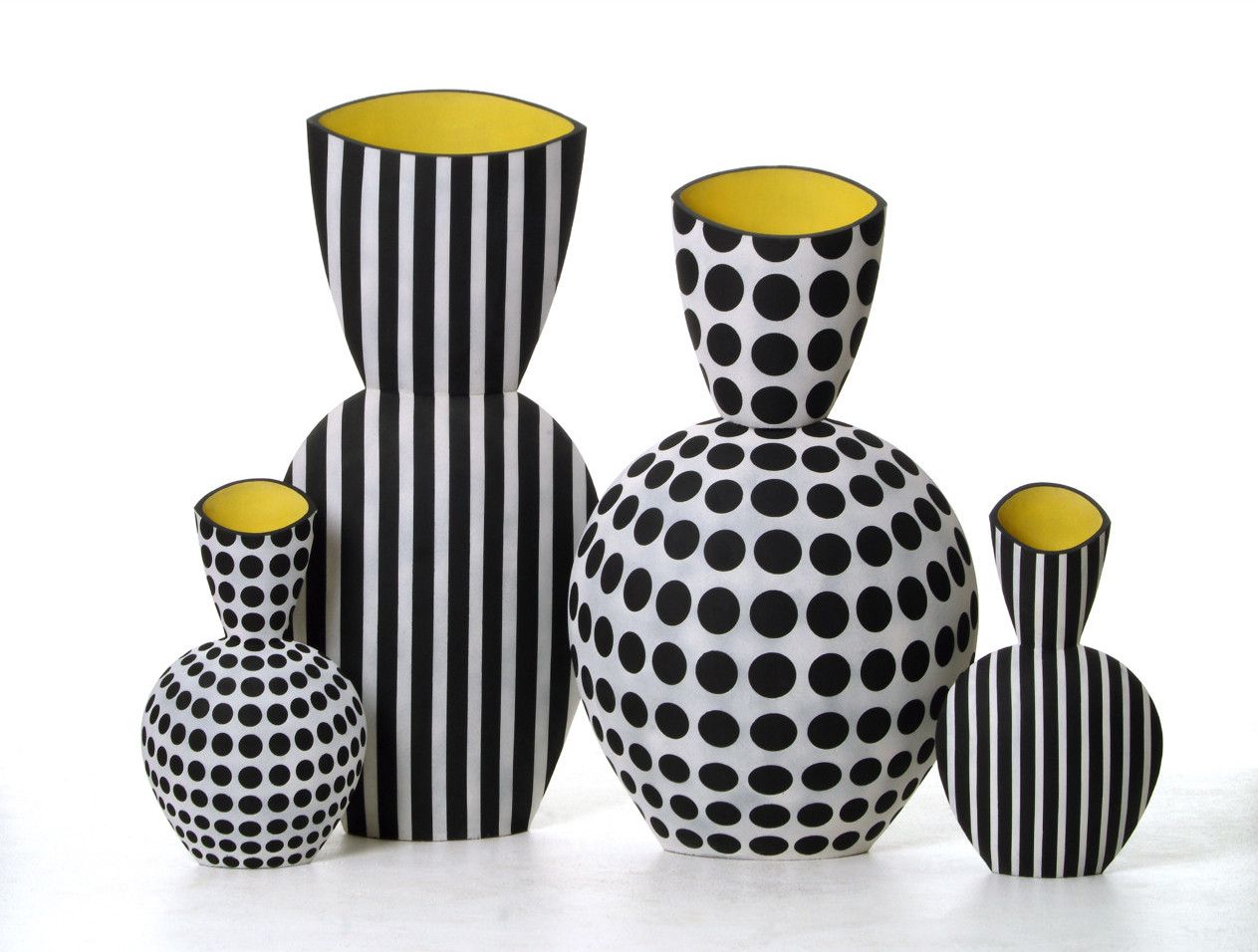 From Function to Fine Art

Elisabeth von Krogh and Her Vessels of Art

From Function to Fine Art: Elisabeth von Krogh and Her Vessels of Art

Elisabeth von Krogh had her breakthrough as a ceramic artist at the same time as Post-Modernism gained a strong foothold in Norway. This was no coincidence. For ceramics, Post-Modernism led to liberation. Much of what Modernists had looked on with scepticism finally became appreciated: strong colours, decoration, style quotations and, not least, humour. These have all been characteristics of Elisabeth von Krogh’s ceramic works since the early 1980s. In addition, her vessels have grown to heights of around 130 centimetres. More than being vessels, they present themselves as sculptures: some resemble big flower pots with lids shaped like cacti; others are based on well-known vase forms at the same time as they resemble succulent plants – with erotic connotations. Such expressions indicate a well-developed appreciation for absurd combinations of figures and forms, and they are unmistakeably influenced by the visual language of cartoons and Pop Art.

It is quite a leap from these vessels to traditional pottery, which would otherwise be a natural frame of reference when an artist’s materials are earthenware clay and slips. Elisabeth von Krogh´s vessels have never belonged to the category that the English ceramics expert Oliver Watson has called ‘ethical pots’, meaning plain utilitarian vessels. The antithesis to this is not unethical vessels, but fine art vessels. Elisabeth von Krogh´s works belong to this category. They are characterized by breaks with convention and complexity in artistic idioms as well as interpretation. Being a fine art vessel is about being a purely aesthetic object, or about representing an idea or a metaphorical meaning.

Even so: If the intention is to create art, why does von Krogh make vessels? There may be many reasons. As objects, vessels are familiar to everyone; they represent a timeless and fundamental form and are part of our collective experience. Much of human history is told by vessels from different times and places. The vessel as a form has quite simply become a symbol of civilization. It tells us of its function, whether the purpose is to store vital necessities such as water and food, or to conserve the ashes of a cremated body. It has therefore become a symbol of both life and death. By making vessels, Elisabeth von Krogh connects with the history of mankind and the rich cultural traditions of which the vessel form is a part. By choosing a well-known symbol, she creates continuity and provides an opportunity for recognition, even though her works do not serve any particular function. They instead pay tribute to the vessel in general.

The vessel as a form presents many sculptural challenges, and the surface can be decorated in an infinite number of ways. Over the years, von Krogh has demonstrated a variety of approaches. For a long time, her main sources of inspiration were forms in nature that radiated strength and vitality. This resulted in many organically shaped vases that, in combination with colour, resulted in a coherent whole. But with the commissioned Arrangement for Five Vessels at Oslo Airport (Gardermoen) in 1998, her production started turning in a different direction. Her new ceramic works are no longer coil-built; they are made with rolled out sheets of clay pressed into plaster moulds and then treated in individual ways. At Oslo Airport we find monochrome vessels in strong colours, arranged as a tableau. The forms are edged, but the most striking impression is flatness. Although they are in reality three-dimensional, they seem two-dimensional. Since making the commissioned project, she has been working with vessels that activate the tension between space and surface, reality and illusion.

This resulted in a travelling exhibition during 2001-02, with an extraordinary presentation of patterned vessels. The way they were arranged in the exhibition was inspired by her experience of the ‘Plain of Jars’ in Laos in 2000: there she saw hundreds of stone jars that have been scattered across the landscape for thousands of years. No one can explain why. In Elisabeth von Krogh`s works, however, the colours and decoration are more reminiscent of Western stylistic ideals from the 1950s. By varying the qualities of lines and dots, similar shapes become dissimilar: some appear rounder than they are in reality; others appear flatter. The impression of flatness is further enhanced by ‘folding out’ the forms and using different types of perspective, as in a cubistic painting. By cutting the mouth of a vessel slantwise, she not only creates a front and a back, but the effect of space is reduced as we view it from the front and above at the same time. In this way, form and decoration can be optically deceiving. We must continually re-evaluate what it is we actually see.

By treating the motif of the vessel as the main focus for her artistic practice, Elisabeth von Krogh has concentrated on something that represents her roots both professionally and as a human being. At the same time, her knowledge of materials and techniques enables her to manipulate her works until they become more or less sheer illusions. We can therefore say that they bridge the gap between the values of traditional craft and the aesthetic ambitions of art. Her works have gradually developed from being mostly vessels to becoming more like sculptures; in later years they have developed further, from being sculptures to become more like images. It is difficult to discern when they stop being the one in favour of the other. Their special field of force is probably to be found in just these floating transitions.